Binding: Expanding a Project to Other Applications

My start in VBA programming was opening Excel files, mooshing them around, and creating bigger Excel files.  Then I learned how to open and manipulate text files as inputs.  Life was good.

The next step, driven by need, was to learn how to send Excel files as attachments to Outlook email.  That was my introduction to "binding", exploiting the Object Library of a different  ("foreign") application.

After spending much time and many words in Late Binding: What they don't tell you! explaining how I discovered how to successfully use late binding to run macros in an Excel workbook's project from a VBA macro in an MS-Access project, I decided it would be a good idea to get to the crux of the matter in one pos.  I think the process I went through might be insightful to others, and a good reminder to myself, but it hides the real how-do-I-do-this-and-why message that should be evident in a good tip. 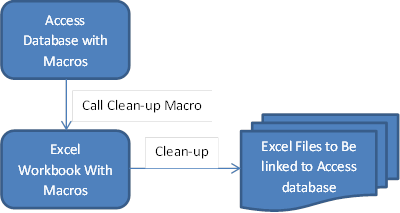 Binding inserts into the host hosted application's object definitions, including the associated properties, events, and methods.

Without binding it would not be possible to open a file that belongs to another application.  Trying to invoked the  "Workbooks.Add" method is meaningless in the MS-Word object library and therefore cannot be executed until the Excel object library is bound to it.   The result of trying to execute an unbound foreign method is a 424 run-time error, "Object Required", if Option Explicit is not used or a Compile Error: Variable not Defined when Option Explicit is specified.

What is needed is a live reference to the other application's object library.

An alternative to binding would be to have code hosted in each of the different applications then the user executes each macro in order.  By binding, the macros in one application (the host) can call the macros in another, can invoke methods from the hosted object library

The concept of binding did not spring forth from object orientation.  Prior to VBA, Java and object oriented languages, mainframe programs (source code) were compiled then the object code was linked together and finally the program was bound to databases.  This is still the case.  Binding was and is a post compilation step.

What is different with VBA binding it it may occur prior to using the interpreter/compiler or during their usage.  Binding using the compiler is "early binding", at run-time it's called "late binding".

To Bind or not to Bind

Binding is not always the answer to making the the MS-Office applications act like a suite.

The "rules" for when to bind are both positive and negative.

As mentioned above, if binding is performed during compilation that is "early binding; at run-time is "late binding".

Early Binding is done by explicitly including the object library of the foreign application into the host VBE during development.  Details of this process are in  How To: Early Bind.

In short, early binding can be set-up before any code is written.  Think of it as a form of c/c++ #include.

Once the early binding is set-up it is possible to write code as if you are in the foreign VBE because when that Object Library is within the VBE.

Late binding is a done by code, only.  The detailed description is in How To: Late Binding.

The two Object Libraries are unbound until the VBA code creates the binding at run time by using a statement such as Set appWord =  CreateNew("Word.Application").

Although the two Object Libraries are now bound, there is still one coding disfferebceOnce bound, late binding and early binding code is nearly identical.

The table below lays out the differences between early and late binding.  The green highlight indicates which is advantageous for each factor.

From this table you can decide whether to use Early or Late Binding based on the importance of each factor.

Another way of making the decision as to whether to use early or late binding is to make Early Binding the default decision then choose Late Binding only if the circumstances are significantly different from this ideal.

As the table above shows, Early Binding and Late Binding are "the same" when measured by the number of factors that favors each.  Unfortunately, one cannot use Late Binding with Early Binding to push everything to green.  Each foreign Object Library is either Early or Late Bound at any point in time.

However, it is possible (and recommended) to develop using Early Binding then convert to Late Binding.  This improves development speed then gets the improvement in portability.

One expected (unconfirmed by test) issue with this approach is that the file size increase established by using Early Binding development will remain until orphaned OpCodes are purged.  Initial research into removing orphaned OpCodes indicates this can be done either by a utility such as Code Cleaner or taking the following steps.  (Note:  From my understanding, this would be a good process for all projects where file size may be an issue)